What is Ocean Black Protection in LG Air Conditioners? 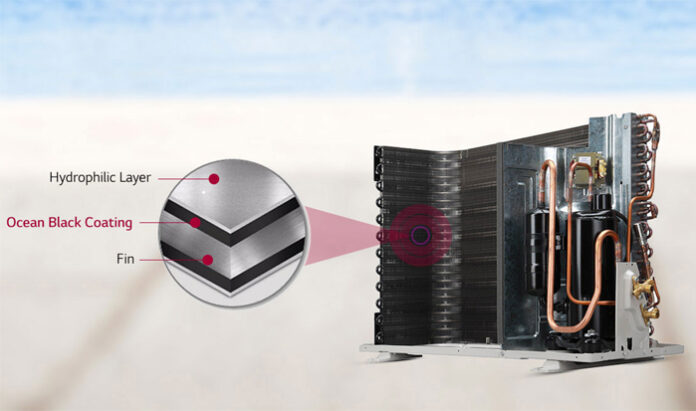 As the human population keeps growing globally, the coastal areas are becoming growth hubs everywhere in the world. A country like Australia has the majority of its human population in cities located on the coastline.

Similarly, in India, you have Mumbai, Chennai, Cochin. Kolkata, and other big cities, built on the coast.

Besides the regular population on the coastlines, you have multiple resorts and hotels coming up in these areas to cater to the tourist population. The charms of living on the coastline are many, but there are specific drawbacks.

The sea breeze can be refreshing with its nascent odour. However, the air along the seacoast contain higher proportions of ozone than the air in areas situated inland. Besides, the evaporated salt water in the air affects the humidity and its quality.

It is known to pose risks to buildings and their components, including the HVAC systems.

The ozone-laden air can accelerate corrosion, thereby posing a massive risk to constructions built along the coastline.

Similarly, the amount of salinity present in such air can cause air conditioning equipment, especially the metal components, to rust faster. The corrosion primarily affects the outdoor AC units and converts the sleek-looking heat exchangers into a rusty mess.

Continuous exposure to such saline air affects the air conditioner’s efficiency and drastically reduces its lifespan. Hence, there is a need to find a solution to combat this unseen element of nature.

Ocean Black Protection technology constitutes a coating on the metal components of the LG air conditioner’s outdoor units to protect them from the harmful effects of corrosive external substances.

This coating is actively complemented by a hydrophilic film that prevents water accumulation on the heat exchanger’s fin, minimizing moisture buildup considerably.

Besides the heat exchanger, other metal components like the base pan, service valve supporter, fan motor brackets, the control box, and other outer panels get the Ocean Black Protection coating.

The Ocean Black Protection coating eliminates corrosion’s primary cause in these areas, thereby reducing repairs and maintenance costs drastically. As a result, it enhances the overall lifespan of the air conditioners.

Lloyd is a reputed manufacturer of air conditioners, LED televisions, washing machines, refrigerators, and dishwashers in India. The company has improvised over the years...

Though Haier originated in China 35 years ago, no one considers it a Chinese brand anymore because Haier has 108 manufacturing plants globally. So,...

When you think of IFB, the first home appliance that features in your imagination is the front-loading washing machine. Yes, IFB is one of...