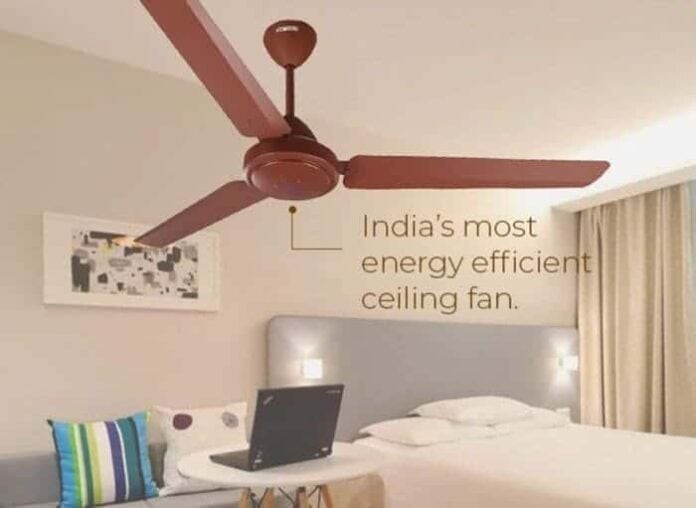 In India, it is impossible to live without a ceiling fan in the house. Of course, I am not referring to the hill stations and places high up in the Himalayas, where many permanent residents do not even know what a ceiling fan looks like.

In our cities on the plains like Mumbai, Delhi, or Chennai, the ceiling fan works for almost 24 hours a day. It entails that whenever we are in the room and are not using the AC, we switch on the fan.

However, do you know how many units does a regular ceiling fan consume?

The BEE star ratings apply to ceiling fans as well. Therefore, the BEE 5-star rated fan consumes less energy than the regular ceiling fan we have in the house.

There is a concept of the super-efficient ceiling fan that ranks higher on the energy saving list as compared to the 5-star rated fans.

We shall now compare all the three appliances discussed above to understand them better. This comparison will also allow us to make a right choice the next time we enter a shop for purchasing ceiling fans.

The formula for determining the electrical consumption of ceiling fans is,

The consumption of electricity depends on various factors.

We calculated the performance of two fans in our house (an 8-year old fan and a comparatively new 2-year old one). The results are as follows.

With these figures, we shall move towards the BEE 5-Star rated ceiling fans and look at its performance.

Everyone knows that the Bureau of Energy Efficiency (BEE) rates electrical and electronics equipment based on their energy consumption efficiency.

The 1-star appliances are the least efficient whereas the 5-star ones are highly efficient. It entails that the 5-star electrical devices consume less electricity than the others.

Thus, one can infer that the BEE 5-star rated ceiling fans consume less power than the regular fans. It is true as the table below justifies these claims.

The comparison shows that the consumption of electricity is approximately the same for the initial speeds. As the speed of the fan increases, the air delivery performance increases as well.

A careful study of these tables shows that the 5-Star rated ceiling fans consume about 70% of the electricity that the regular ceiling fans do at the highest speed. Naturally, it results in the lowering of your electricity consumption bill.

It is advantageous in places like Chennai because our electricity rates have a slab-wise structure. As we move higher, the prices are more. The 5-star rated ceiling fans can help us move to a lower slab whereby we get the benefit of a lower price. It should be the same elsewhere in the country as well.

Nowadays, the air conditioning system has become a necessity instead of a luxury as it was some years ago. Usually, we do not use the AC and the ceiling fan together at the same time. We switch the fan off when we put on the AC and vice versa.

It is a tiresome job as you have to get up from your position and switch off the fans. Switching the AC is easy because of the remote control. It would be excellent if our fan had a remote control option. We would not have to get up at night and grope for the switch to put it off.

The Super-Efficient Fan solves this problem for us as it comes with a remote control option. Also, the fan comes with a brushless DC motor thereby making it more efficient than the BEE 5-star rated ceiling fan.

We, in India, do not have the quality of believing anything unless we experience it. Hence, we provide evidence that the Super-Efficient Fan is more efficient than all other fans. This table says it all.

For the sake of convenience and bringing a sense of equality to the calculations, we have made the following assumptions.

The Super-efficient fans are double the cost of the regular fans but are 50% cheaper when it comes to electricity consumption for over ten years.

The BEE 5-Star rated fans strike a perfect balance between the regular fans and the super-efficient fans.
Verdict

One should opt for the Super-efficient fans for obvious reasons. You can recover the difference in the cost of these fans as compared to the regular fans within four years.