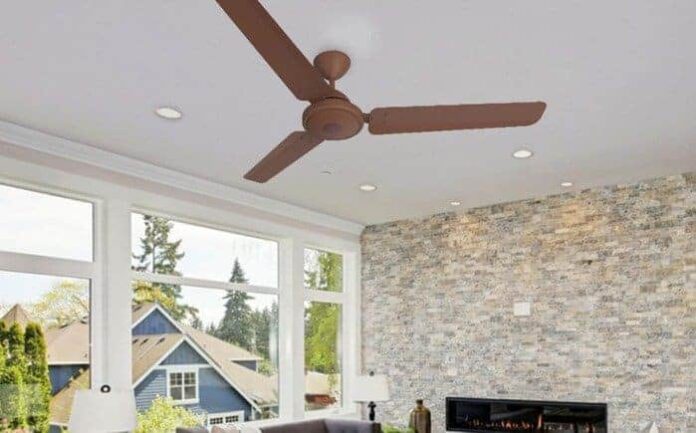 The reason is simple. A 5-star rated appliance consumes less energy than a device with a lower rating.

Now, we consider that ACs and refrigerators guzzle electricity. Hence, it is in the fitness of things that we should not mind spending something more to gain in the long run.

However, do we do the same in case we venture to purchase ceiling fans?

Unfortunately, the broad response is in the negative. We generally feel that ceiling fans do not consume much electricity.

Research shows that ceiling fans consume more power than what our tube lights and other lighting arrangements do.

It is because ceiling fans run continuously throughout the day and night as well. Studies have shown that power consumption by ceiling fans is close to 30 to 40% of the total household consumption.

Secondly, we have more than one ceiling fan running at all times in our homes.

The need to conserve electricity brings us to the discussion of using BEE 5-star rated ceiling fans. Yes, the Bureau of Energy Efficiency (BEE) rates ceiling fans as well on the scale of 1 to 5.

Other than this fact, there is nothing to suggest that the regular ceiling fans are better than the 5-star rated fans. Let us look at some of the numbers to get a clear idea.

The regular ceiling fans consume 75 watts whereas the consumption of the 5-star rated fans is 50 watts. It is a definite savings of more than 30%. Some of the latest generation 5-star rated fans have a rating of 45 watts.

Consider that a ceiling fan works for a minimum of 12 hours a day. Let the numbers do the talking now.

This table shows that you can save a minimum of ₹ 500 to ₹ 550 when you switch over to the 5-star rated ceiling fans.

Usually, people do not replace ceiling fans in the house for a minimum of 5 to 6 years. Under such circumstances, you can save a sizeable amount by way of reduction in power consumption.

How does BEE rate ceiling fans?

India is a power-deficit country. It explains why you have power cuts and load-shedding in almost all the cities and towns in India.

Therefore, there is a need to conserve electricity. BEE has introduced the rating system to indicate the degree of efficiency of an appliance. It is going to become mandatory for all electrical and electronic equipment to have a star rating in the future.

Coming to ceiling fans, BEE rates them by their service value. The service value is a ratio of the air delivery and the power consumption.

Any ratio above 4 entitles the fan to have a 5-star rating. Consider the classification of the fans we have discussed in the example.

What is the difference between a traditional fan and the 5-star rated ceiling fan?

The 5-star rated ceiling fans have a higher power factor. The power factor is a technical term. You can define it as the ratio of the actual power that comes through as AC (alternating current) to the real-time power in the circuit.

The 5-star rated fans have high-quality copper windings. As a result, the stator of these fans is better than that of the traditional fans.

In these 5-star rated fans, the air gap between the stator and the rotor is less thereby resulting in a better induction effect. Hence, you have minimum heat loss.

These two factors are primarily responsible for bringing down the power consumption from 75 watts to approximately 50 watts. You end up saving power in the bargain.

Some disadvantages of the 5-star rated fans

Some of the ceiling fan manufacturers have started compromising on the air delivery and the RPM to reduce power consumption.

It results in the reduction of the optimum speed of the fans. It is a disadvantage in a country like India because the fans run at full speed in India at all times. The reduction in the speed reduces the delivery of air thereby not providing the necessary comfort for the consumer.

If the reduction in power consumption is what you are looking for, the 5-star rated ceiling fans are the ideal choice.